Impressions from the client

We interviewed the chief priest of Shinnoji Temple, Takeda, who requested the construction of the temple.

Q. What made you decide to work with Kirinaka Construction?

I was looking for a shrine carpenter to renovate the belfry, but my neighbor’s shrine carpenter was too old, so I was introduced to Mr. Kirinaka through an acquaintance. When I saw Mr. Kirinaka’s work, I felt that he was doing a careful job. I thought he would be the right person for the job, so I asked him to do it.

I went to see Mr. Kirinaka’s work, visited various belfry halls, and had a series of meetings with him before I made the request. We were told that we were the first to build a belfry hall.

Q. What did you find to be polite?

The fact that the client’s opinion is reflected in the work, and Mr. Kirinaka’s own way of thinking. When we worked together, I could tell that the work was well done.

As for our belfry hall, I didn’t have a lot of orders, but I was able to ask him what I should do. Mr. Kirinaka gave me some suggestions. I like simple things.

Q. So you had the client’s intentions plus Kirinaka-san’s suggestions?

Yes. He reflected my opinion about it.

Is there anything that attracted you to this way of thinking? He’s not much older than I am, but he has solid skills and a strong sense of wanting to protect the architecture of temples and shrines.

That’s why I felt that I could trust him. I see. So you want to protect the architecture of temples and shrines? I think that is a strong desire.

Wood lasts longer than concrete. Wood has more warmth, doesn’t it? Yes, it does. The most important thing is the warmth of the wood, and as it ages, the color and the way it blends in is really beautiful.

So you were attracted to Kirinaka-san’s work and way of thinking in many ways?

Yes, I was. He is very meticulous even in the details.

There are parts that are actually hidden, but even those parts are very careful. So you don’t cut corners just because you can’t see it? That’s right. When we built the belfry, our request was that it should last for 100 to 200 years. We asked for a simple belfry that would last for 200 years.

Do you think you will be able to achieve that?

Yes, I think so. I think it will be enough.

What do you feel is the merit of working carefully in such an invisible and hard-to-see place?

The master builder himself is a warm-hearted person, and I think this is reflected in his work. I think that the more careful the work is, the longer it will last.

Rather than messy work, I would rather have careful work. That’s why I’m glad I asked for this service. I think we were able to achieve more than we imagined.

Q. What do you think of the reaction of the visitors and the parishioners when they see the actual belfry hall?

Everyone is very happy. A splendid belfry has been built. They said they were glad that it was built in our generation. I see.

It’s difficult to rebuild a new building in this day and age, but the parishioners worked very hard to make it happen, and I think that’s why they are so happy. I think that if we didn’t have it, people would ask us if we had a child with a height. The fact that I was able to be involved in the temple’s projects while I was still alive must be a source of pride for me. The fact that I was able to provide purified funds for it is probably a source of pride.

Although there were twists and turns.

If you don’t mind me asking, what kind of twists and turns did you go through?

It’s all about the financial support, isn’t it?

But everyone worked very hard. The head priest and the temple’s board of directors had no choice but to ask for help, and the parishioners who accepted the request did their best, so we were able to complete a good project.

It’s all about how much you can build with a limited budget.

I see. Did Kirinaka Kenchiku have any suggestions for such issues?

I looked at the drawing and said, “This is beautiful, let’s go with this. That’s how it went. Rather than proceeding with the work at a rapid pace, we received suggestions, had discussions, and were able to move forward with a sense of satisfaction.

So you were able to create something that was one or two steps above what you had expected within a limited budget?

Finally, do you have any advice for people who are going to build or repair temples and shrines?

There is always room for more. There is always more, but the amount of money you have ahead of you is limited. I think you have to think about how you can leave something good for future generations.

This will change the content of the work and your trust in the master builder. The most important thing I would like to say to prospective builders is whether or not the work is done carefully. The client may have various requests.

The client will have various requests, and the person who can make the best proposal is the one who can do it. I’m sure they’ll do a good job. I see. I think the best way to build temples and shrines is to do a careful job.

Why do you think so?

That is what is conveyed to the people who come to the temple. It creates a beautiful and soothing atmosphere.

I think such buildings are necessary. In this day and age, it’s hard to find a time when people feel at ease, but when they come to the temple and see the beautiful buildings and decorations, they can feel at ease. I believe that this is the meaning of coming to the temple. 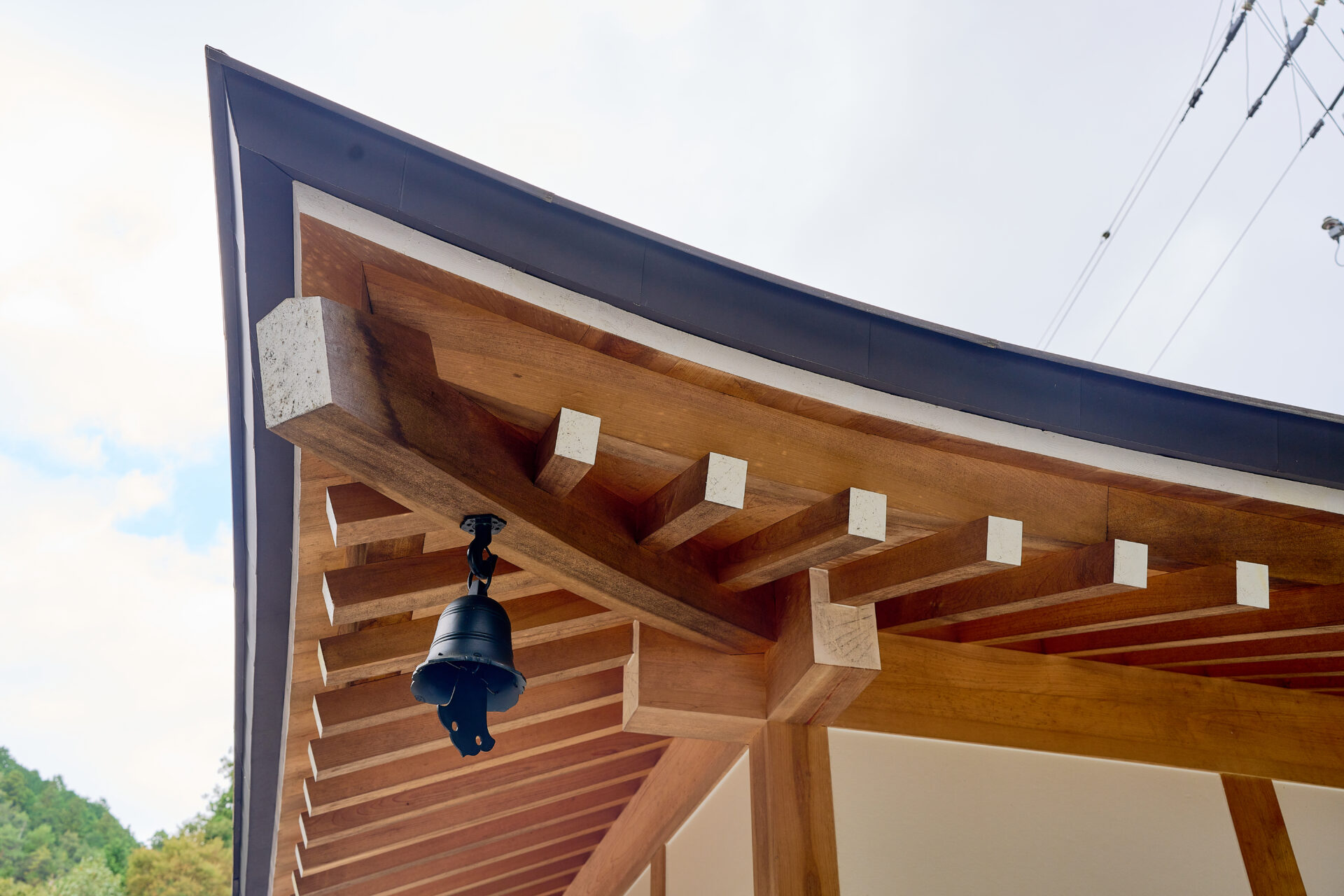 Kissyouin Kaisan Hall Kamiyama chou Kissyouin Kaisan Hall Impressions from the client We interviewed the head priest of Kisshouin Nii, who requested the construction of the temple. PLAY Q. Please tell us how you came to work with Kirinaka Architects. When I was building 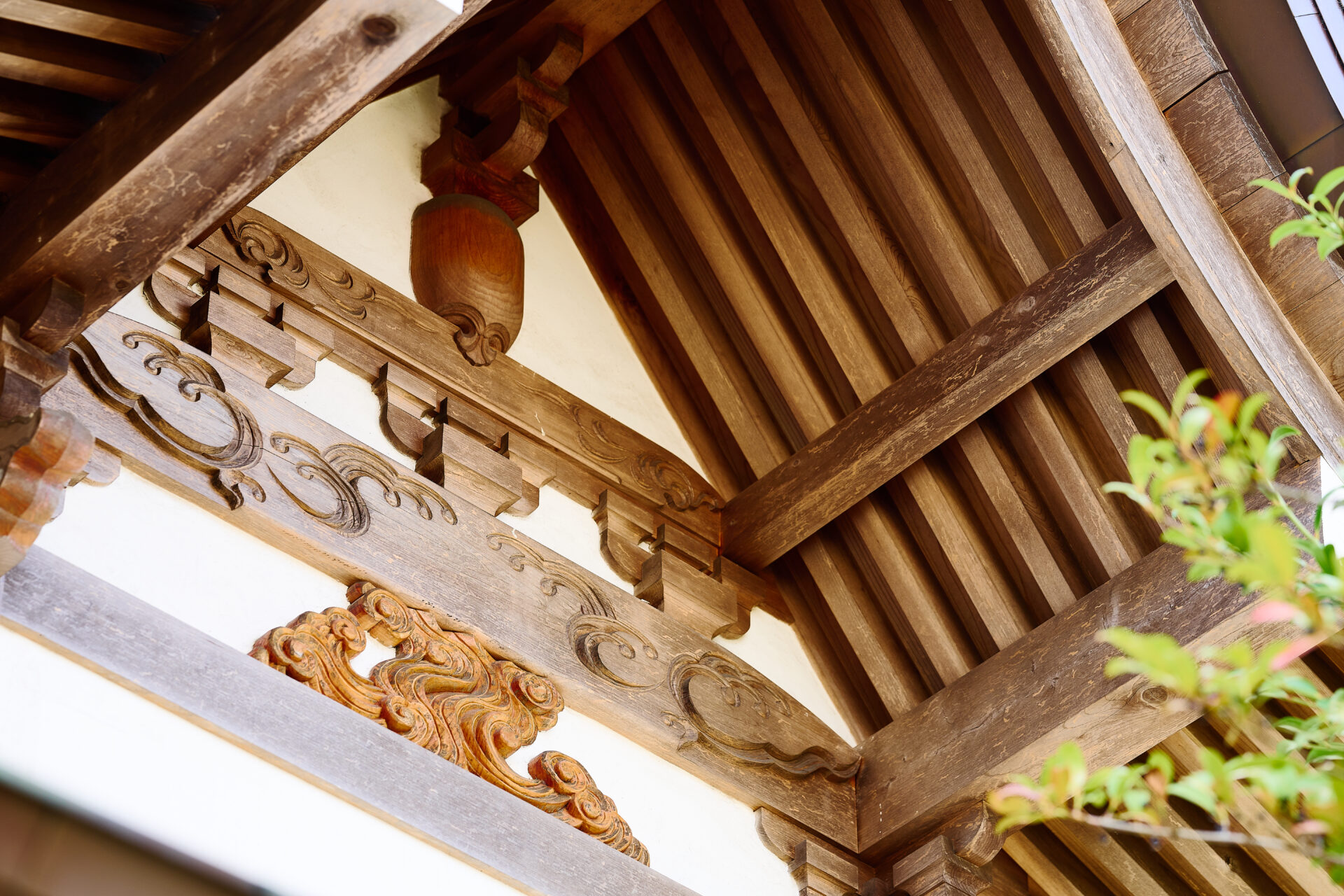